Frontier Nursing University
Featured Program: Graduate Nurse-Midwifery specialty track that can be pursued full- or part-time while completing a Master of Science in Nursing or a Post-Graduate Certificate
Request Info

Certified nurse-midwives are pillars of obstetric departments in Nebraska’s top hospitals, facilitating the birthing process and providing antepartum, intrapartum and postpartum care to mothers and newborns under a collaborative practice agreement with a physician.

In addition to working with expectant mothers, CNMs in Nebraska serve as the primary providers of gynecologic and obstetric care for many women, often maintaining lifelong provider-patient relationships with the women they support through pregnancy and childbirth.

Under Nebraska legislature, CNMs in the state may practice in settings authorized by their collaborating physician or within an organized public health agency. Hospitals that employ CNMs provide mothers with the chance to undergo the childbirth process in an established medical facility while still receiving the personal touch that only a midwife can provide. Though most CNMs work in hospitals, there are also several thriving independent midwifery practices in Nebraska that employ the services of certified nurse-midwives.

One such practice is the Midwife’s Place in Bellevue, which employs three CNMs, several clinic and labor nurses, and a massage therapist to provide well-rounded care to expectant mothers. Beatrice Community Hospital in Beatrice is another facility that offers nurse midwifery care. The hospital’s maternity unit, which also employs two obstetricians, facilitates the birth of more than 200 babies every year.

Steps to Becoming a Certified Nurse Midwife in Nebraska

Nebraska RNs with licenses in good standing become certified nurse-midwives by obtaining national certification through the American Midwifery Certification Board (AMCB) and qualifying for advanced practice registered nurse (APRN) licensure through The Nebraska Department of Health and Human Services, Board of Nursing.

The steps in this guide provide detailed instruction on how to become a certified nurse-midwife in Nebraska:

Step 1. Earn a Qualifying Master’s or Higher Degree in Nurse-Midwifery

The Nebraska Department of Health and Human Services (DDHS) requires APRN-CNM applicants to complete a master’s or higher degree in nurse-midwifery through a program recognized by the Accreditation Commission for Midwifery Education (ACME).

With campus-based nurse-midwifery master’s programs in short supply throughout the nation, flexible online programs that accommodate the schedules of working RNs have become dominant in the field. While there are no campus-based nurse-midwife programs in Nebraska, ACME-accredited online programs with partnership agreements that support clinical rotations in Nebraska’s hospitals are widely available.

To be eligible for conventional MSN and MS programs in nurse-midwifery, enrolling students must hold a Bachelor of Science in Nursing (BSN). For RNs that hold an associate’s degree in nursing, accelerated RN-to-MSN bridge programs with a focus in midwifery offer the chance to earn both a BSN and MSN in one program.

Didactic courses cover topics that include:

The clinical portion of nurse midwife programs is designed to give RNs hands-on experience under the guidance of a physician or APRN. Online students will collaborate with their program director to find a suitable local facility for the clinical sequences.

Supporting hospitals in Nebraska include:

Step 2. Pass the National Certification Examination in Midwifery through the AMCB

Earning the Certified Nurse-Midwife (CNM) credential through the American Midwifery Certification Board (AMCB) is a fundamental step to becoming a nurse midwife and qualifying for licensure as an APRN-CNM with the Nebraska Board of Nursing. To earn this national certification, candidates must pass the Certified Nurse Midwife Exam administered through AMCB.

Applications for the exam and the accompanying fee and supporting documents must be sent to the following address:

The exam consists of 175 multiple-choice questions. RNs have a four-hour time limit to complete the exam, which is divided into the following sections:

The Certified Midwife Exam may be taken at AMP testing centers, located within H&R Block offices, in the following cities:

RNs who have completed a nurse midwife program that included a secondary specialty in women’s health also have the option of taking the Women’s Health Care Nurse Practitioner (WHNP) Exam to achieve their WHNP-Board Certification through the National Certification Corporation (NCC).

The 150-question exam is divided as follows:

The exam may be taken at the same AMP testing centers as the Certified Nurse Midwife Exam.

RNs will have a three-hour time limit to complete the exam. Further details regarding the exam may be found in the WHNP Candidate Guide.

Step 3. Apply for APRN Licensure as a CNM with the Nebraska Board of Nursing

After successfully completing the exam process and earning national certification, CNMs must apply for APRN licensure with the Nebraska DHHS, Board of Nursing.

After being notified of a clear criminal background check, applicants must complete the application to become a Certified Nurse Midwife found on the DHHS website. The following items must be included along with the completed application:

Nurses must additionally contact the institution from which they received their degree to send their official transcript to the DDHS.

All materials should be sent to the following address:

Nurses will be contacted by the DHHS within 150 days regarding the status of their licensure. After receiving their license, CNMs must enter a Certified Nurse Midwifery Practice Agreement with a collaborating physician who has been approved by the DHHS. CNMs may not begin practice until this agreement has been established. The completed agreement form should be sent to the following address:

After receiving state licensure and establishing their practice agreement, nurses may embark on their careers as APRN-licensed certified nurse-midwives. Because Nebraska’s CNMs in are not authorized to attend home deliveries, expectant mothers seek their services exclusively through the state’s many hospitals and medical centers. Just some of the potential employers in Nebraska include:

The following job postings, taken from a survey of job vacancy announcements in 2015, are provided to further demonstrate the demand for CNMs in Nebraska (Shown for illustrative purposes only and not meant to constitute a job offer or assurance of employment):

APRN Licensure – APRN-CNMs are not required to undergo continuing education in Nebraska. However, by October 31st of every even-numbered year, CNMs must have either a physician or another CNM mail a letter to the Nebraska Board of Nursing that attests to the practitioner’s competency to practice. The letter must verify that the CNM has either completed 850 practice hours in the previous two years or 2,080 practice hours in the previous five years. Complete details regarding the letter can be found on the Nebraska Department of Health and Human Services (DDHS) website. CNMs must also pay a renewal fee of $68 to the DDHS during this two-year renewal period.

CNM Certification – CNMs may maintain their certification with the AMCB through one of the following continuing education options:

Salaries for Certified Nurse-Midwives in Nebraska

The 2010 annual report published by the Nebraska Center for Nursing provided a detailed breakdown of salary ranges for certified nurse-midwives who responded to their workforce survey:

Job Growth Projections and Employment Opportunities for CNMs in Nebraska

In 2018, less than 7% of births in Nebraska were attended by midwives, according to the U.S. Department of Health & Human Services, Centers for Disease Control and Prevention and the National Center for Health Statistics.

However, the number of jobs for certified nurse-midwives in the state is expected to grow by 25% during the 10-year period leading up to 2028, according to the U.S. Department of Labor.

The Nebraska Center for Nursing’s annual report from 2010 provides a high level of detail on the types of employers the state’s certified nurse-midwives worked for. More than 64% of these CNMs worked in physician’s offices or health clinics, while 14.3% were employed in hospitals. According to the report, the remaining 14.3% were self-employed.

The shortage of OB/GYN physicians in Nebraska is so dire that the state’s Rural Health Advisory Commission identified several state-designated shortage areas in obstetrics and gynecology specifically in 2013. The lack of OB/GYN physicians is especially critical in the western half of Nebraska. The only county in that part of the state that did not have an OB/GYN shortage was Scotts Bluff County. Central Nebraska did not fare much better with Buffalo and Adams Counties being the only counties that did not have an OB/GYN shortage.

(Salary data for nurse-midwives reported by the U.S. Bureau of Labor Statistics in May 2019. Figures represent state data, not school-specific information. Job growth data provided by Projections Central, a resource funded by the U.S. Department of Labor’s Employment and Training Administration. Conditions in your area may vary. Information accessed March 2021.) 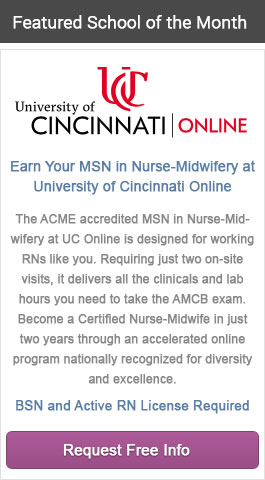